Knowing the next leg of our journey was to take four days, it was with excitement and a little trepidation that we boarded Train 5 to Moscow.  We hurriedly found our cabin which had a different layout to the one in our train from Beijing.  There was a seat/bed on either side of a table, and this time the toilets/washrooms were either end of the carriage.  Each side of the door was a handle.  We couldn’t work out what they were for, but would find out in the early hours of the following day.

As we rumbled through the Mongolian landscape on our way to the Russian border, passing houses surrounded by wooden fences against a backdrop of mountains covered in a light sprinkling of snow, we took in our new surroundings.

We had read about, how shall I put it, less than friendly Provodnitsas, but our Mongolian train attendants, while not exactly ready to crack jokes with us, were polite and attentive.  During our journey, they kept the washrooms spotless, and the samovar topped up with hot water.  Contrary to our experience on the Chinese train, they also turned a blind eye when we opened the windows in the corridor.  You do crave a bit of fresh air when you’re travelling on a train for such a long stretch of time.

Our view constantly changed, it was like watching a non-stop National Geographic documentary.  Small communities started to merge into picturesque snowy scenery.

Followed by an amazing sunset.

Here is John and Lindsay absorbed in the vista. 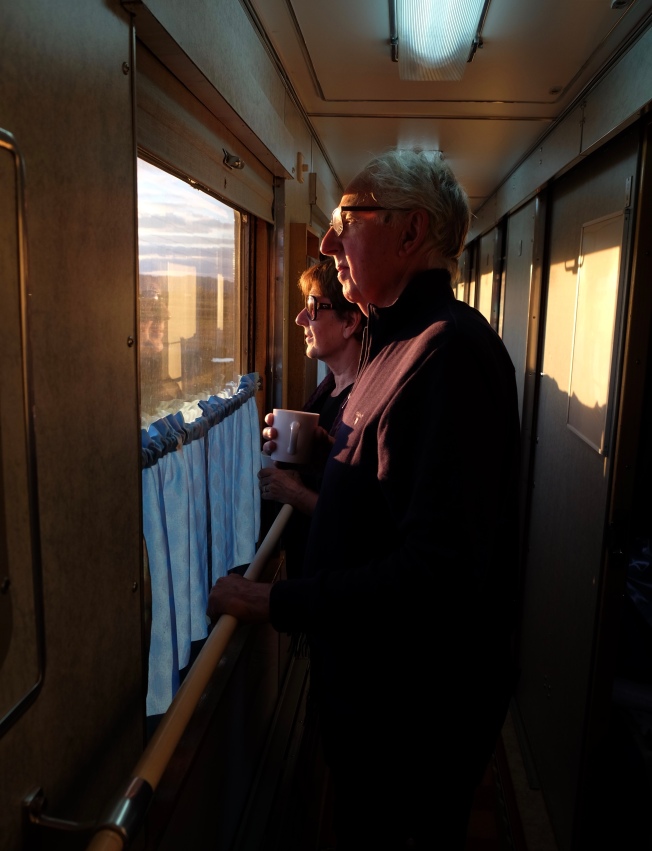 It was soon time to eat our picnic food bought in Mongolia for dinner and prepare ourselves for the Mongolia-Russia border at Sukhe-Bator.  It wasn’t until about 1am that we were through customs and on our way again, but only for about an hour.  There was a sharp knock on the door, and as Howard slid it open I awoke with a migraine crawling around my cranium and a stern Russian in uniform waiting with little patience for my passport.  Paperwork having been studied thoroughly, we were instructed to leave our compartment.

Standing in our pjs in the corridor, we looked on sleepily and obediently as a lady from border control yanked down the mystery handles either side of the doorway, and proceeded to use them as footholds to clamber up and search our storage area.  So that’s what they were for!  It was a relief when we were allowed back into our berth, I could take a couple of strong painkillers, and we were left alone to get some sleep before waking up in Siberia.  It’s a strange thing when you travel by train that you start to find it hard to get to sleep when you aren’t moving and being rocked by the gentle rhythm of the wheels beneath you.  It becomes a beguiling comfort.

Lifting the window blind on waking, we were greeted with beautiful views of Lake Baikal.

Originating 25 million years ago and at a maximum depth of 1,632m, it’s the deepest and most ancient lake in the world.  Sitting back enjoying travelling around this 640km stretch of water, I remembered from working on a documentary about Nureyev, that he was born on a train by this very lake!

At our very first stop this side of the Russian border, we hopped off the train, and sprinted out of the station, crossing the road to a grocery store to spend some roubles on more provisions.  You had to make precision strikes so you made it back on board in time.

We then settled into a routine of non-electronic activities.  In addition to reading and gazing out of the windows, I liked old fashioned puzzle books as I could annoy everyone by asking crossword questions when I got stuck.  We discovered that our brains didn’t work as fast as google and sometimes John would pop his head around the door with the answer to 6 across or 10 down that we’d been trying to think of 24 hours previously.

Occasionally we’d unpack the cork and try and figure out what it could possibly be used for.  Or we’d pop down along to the samovar for hot water and have a cup of tea.  Then when we’d really run out of things to do, we’d wash up and make use of our Mongolian tea towel.  We took living in the moment to a whole new level.

The dining car was a little different to the Mongolian one.

We spent our evenings here in the dazzling light of a swirling disco ball, eating, playing cards and listening to the waiter’s selection of Eurovision style music .  It was quite an exhilarating walk to get there swaying by many berths, and experiencing quick blasts of exterior noise and fresh air as we passed between carriages.  Other than a few squats and stretches it was the most exercise we did.

At one late night stop, we stepped onto the platform and watched as coal was loaded on board.  Such sights become your entertainment when there’s no TV or wifi and 4G is only sporadically available. 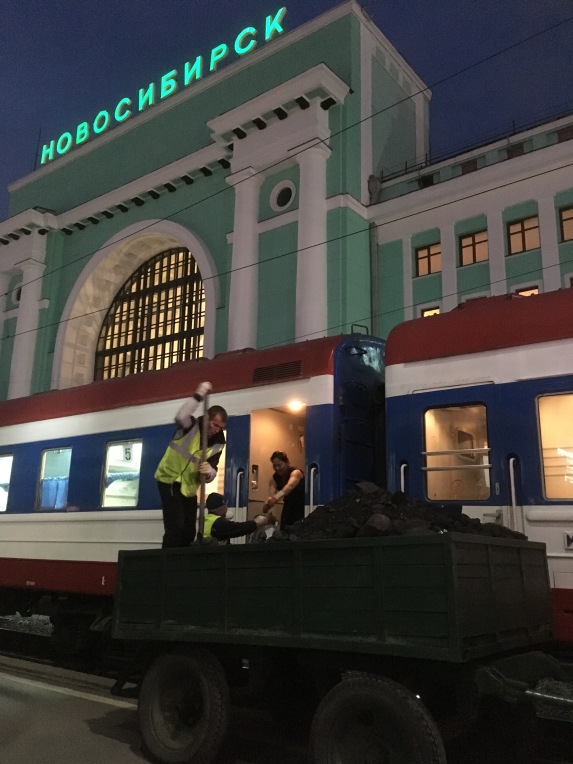 and running around taking snaps. 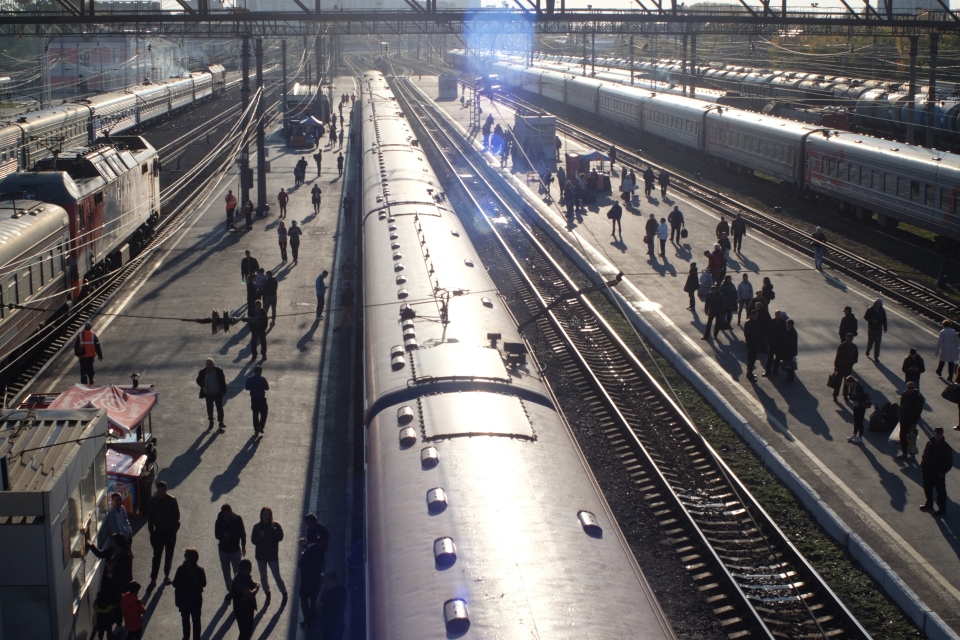 For about a day and a half, we past by miles and miles of silver birch.  Thousands of them.  Millions.  While we were reassured that there was still a huge area of the world covered by trees we started to look forward to our approach to the capital.

But just before we pull into Moscow, I want to share a picture of how the many nationalities on our carriage shared the one and only power supply available.  It made our Provodnitsas chuckle and I think serves as a great example of how people from around the world can all work amicably together and share.

And so it was that on a damp afternoon, after four days aboard the train, we pulled into Moscow, our final destination 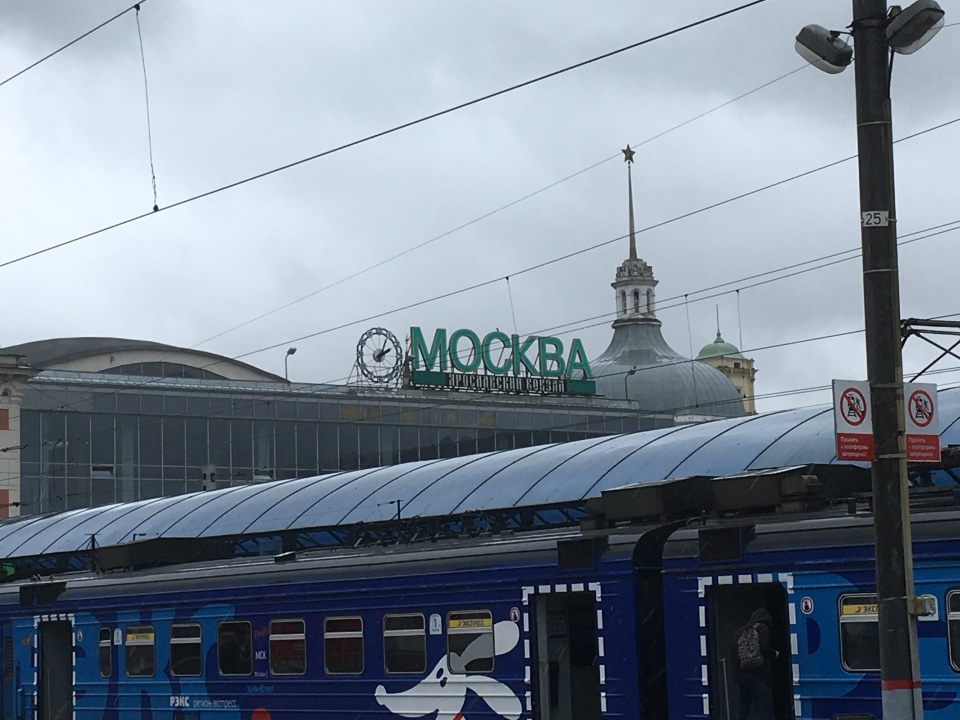 As we stood on the platform in the rain, we had a sense of déjà vu, as once again we searched in vain for a guide holding our name.  It took a few phone calls and a search around the station for a driver to appear, soggy name card in hand.  He didn’t speak English so we weren’t able to comprehend what had happened.  It could well have been bad traffic as that’s what we hit on our way to the hotel.  Regardless, we couldn’t wait to settle in and explore this new city.

[ALL PHOTOS OWNED BY CHRISTINE NEWBY.  PLEASE ASK PERMISSION TO USE]